This page is dedicated to the memory of Prahran and Cheltenham Baseball Club members who have passed away.

If you have any information on other members who have passed away not listed on this page, please forward information to cheltenhamrustlersbc@gmail.com

It will be gratefully received.

Click on the names to read a tribute and thoughts about the person. 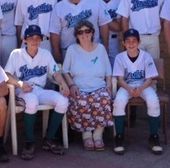 The Teal Game: A great tribute to a great person

The 2014 Teal Game turned out to be an absolutely marvellous tribute to Gabby Taranto; it raised awareness for Ovarian cancer and raised money for research; the boys looked brilliant in Teal, and as a positive sidenote, they won the game. Perfect.

Everyone who was there will agree it was just a great morning – the rain tried to disrupt it, but Gabby was having none of that, turning off the waterworks for us shortly after it started – well done Gabby!!

It was just great to have the Taranto family all there; from Phil throwing out the first pitch (and nailing the strike!), to the presentation of the game MVP (Brandon Stenhouse), the family were involved in the day.

Geelong BC entered into the game in the spirit of the day, credit to them, wearing Teal sweatbands, to match the teal outfits the Chelt boys were wearing – and didn’t they look great, with ‘GT’ above their hearts in a moving tribute to Gabby.

They won’t want me to say this, but bad luck, absolutely full credit has to go to Pat O’Neill, Katrina, Jade and Johnno for being so active in getting this together; it was simply a credit to them, and to the club.

Thanks also to all the generous senior players who donated money towards the teal playing tops.

Some thanks you’s and acknowledgments:

Ben Leslie for donating a wooden Baseball Bat….which will be put up for auction soon.

Ian Palmer for coming out of retirement and cooking the BBQ.

Christine Blackmore, one of Gabby’s bridesmaids, who came down especially to remember Gabby.

And thank-you to everybody who came down and supported the day, with your support we were able to raise $1172 so far towards Ovarian cancer research; and, alongside of paying tribute to Gabby Taranto, that’s the best possible thing that could come out of the day – we are making a difference in combatting ovarian cancer.

Final word to Pat O’Neill, “Thanks for the help, it was a great morning, and a great way to remember a great friend and club person.”

This, as much as sports, is what clubs like Cheltenham are about. See you all at the Teal Game next year.

Photos of the day below by Brendon Beacom.

Click on the photos to enlarge and scroll through